This brownish-grey bird is the most common of the Indian Hornbills. It is among the smallest of the Indian species, similar in size to the Malabar Grey Hornbill. Its blackish beak has a pointed casque. The long grey tail is tipped black-and-white, which is conspicuous when the bird is landing. The male has red-brown eyes with black orbital skin, female has smaller casque, dark brown eyes and dull red orbital skin. Call is a variety of squealing and cackling notes and some short piping sounds. One of their calls is a shrill "wheee"; the other is a cackling "k-k-k-ka-e". 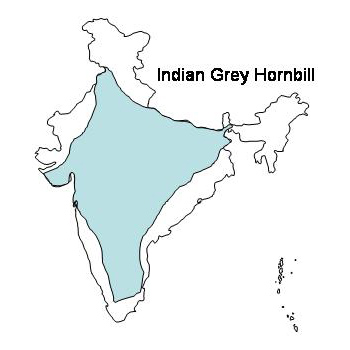 It is found in most parts of India, from the Himalayan foothills, southwards through the Indian peninsula, absent in the very dry areas of western India, and in wet forests of the Western Ghats and north-eastern India. Also found in parts of Pakistan, Nepal and Bangladesh. In deciduous forests, woodlands, thorn forest, can be also seen in city gardens, plantations and parks. Usually seen in the plains up to 600 m, but reported up to 1400 m in the Himalayan foothills.

They eat a variety of fruits (mainly figs), and also termites and other insects, small reptile and rodents and, sometimes flowers. One study established that it ate 22 fruit species. They are known to dust-bathe.

They are usually found in pairs or small flocks of 5-6, but can be seen in larger groups of up to 30 birds, at fruiting trees. They are mainly sedentary, but make local movements in search of fruiting trees. The elaborate courship rituals starts 3 months before (inspection, cleaning of nest cavity, bill-grappling, courtship feeding and pulling each other’s tail) and the pair mate many times before female entry into the nest cavity. For nesting, they use native and introduced trees, usually 3-13 m off the ground.

The breeding system in the species is not fully known, but believed to be cooperative at times with male helpers. The mother stays in her tree hole nest from March to June, rearing 2 or 3 chicks. Eggs are laid in Feb or May-June (clutch of 2-5 eggs). Female seals with faeces and pulp, male brings mud. The incubation period is 21 days, fledging period is at least 45 days, but the female emerges about 1-4 weeks before chicks. Average 66 days for female incarceration. Female helps but not so much, chicks leave one by one, repair the nest entrance by themselves, with mud brought by male. Whole cycle lasts 93 +/- 5 days.

Widespread across the subcontinent with a large range and common in many areas. Adaptable species able to survive in human-modified habitats, although optimal habitat may have declined in some parts of range. Global population believed to be stable and substantial.