Great Hornbills are the largest hornbills in India (112-150 cm), males: 2.6 to 3.9 kg; females: 2.16 - 3.35 kg. It has a white tail with a horizontal black band, white neck and wing bars, wing edges are white-tipped. Eye colour: males: red, with black skin; females: white eyes with red skin around the eyes. The yellow beak is topped by a casque. The male has a flat casque forked in front and edged with black; the female's casque is smaller with no black. The white plumage on the head, neck, wing coverts and tail base are often stained yellow with oil from the preen gland. It flies with heavy wing beats, a few flaps and a long glide. The call is a loud reverberating kok-kok, often by a pair together, which can be heard up to a kilometer away. They also make other guttural sounds. 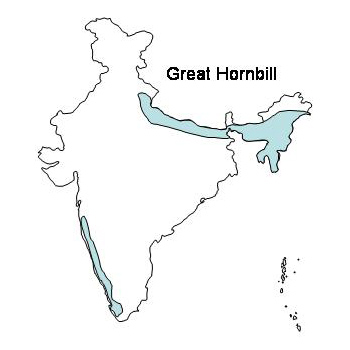 Great Hornbills are found in three separate areas in South Asia; in the Western Ghats, the Himalayan foothills in Uttaranchal to south Nepal and Bhutan, and north-east India. They also occur in Myanmar, islands in the Mergui archipelago, southern China, Vietnam, Laos, Cambodia, Thailand, peninsular Malaysia and in Sumatra, Indonesia.

They occur in primary evergreen and moist deciduous forest, mainly in lowland forest, but they can be found up to 2,000 meters in some areas. In north-east India, they are generally not recorded above 1000 m. They are also seen in selectively logged forests and plantations close to larger forests.

The species is monogamous, and can be sometimes territorial. In most parts of its range, the breeding season runs from January to June. Breeding is from March to July in north-east India, and from February to May in the Western Ghats. Several kinds of hardwood species (mainly dipterocarps) are used for nesting in Thailand and Western Ghats. In Pakke Tiger Reserve, 85% of nests are on Tetrameles nudiflora, an emergent, softwood species. The cavity is a natural hole located high up on the tree, often with an elongated shape. The female enters and seals herself up with faeces, bits of wood, bark and debris. She leaves a vertical slit open through which the male passes food.

The nesting cycle ranges from 110-129 days in Pakke Tiger Reserve, while in Thailand it ranges from 102-144 days. Great hornbills usually produce one chick, although 2 eggs are laid. Incubation is for around 38-45 days. Several visits are made daily by the male to deliver food. The male perches near the cavity, regurgitates fruits out from his gullet to the female. After the chicks hatch, the amount of food delivered increases. The female comes out after around 85 days in Thailand, when the chick is a few weeks to 2 months old. She helps with feeding. The chick reseals the cavity and comes out about 72-96 days later. In Pakke TR, females came out after about 96 days, while chicks remained inside for up to a month more

During the breeding season, an spectacular behaviour called aerial casque butting is seen where males clash with their casques while flying in the air.

They are mostly seen as pairs or family groups, although larger flocks are sometimes seen on large fruiting trees, especially figs. Flocks gather in large communal roosts in the evenings. In Pakke Tiger Reserve, flocks of up to 60 Great Hornbills have been seen roosting at a single site with more than 100 Wreathed Hornbills in the winter (non-breeding season). Roost sites are often along rivers/perennial streams in open habitat with scattered trees or on trees along steep cliff edges.

Near Threatened by the IUCN Red List, Schedule I of the Wildlife Protection Act of India

Given wide distribution, it is not considered as threatened globally. However, it is not found in large numbers through most of its range. It faces threats from hunting and loss of its most preferred habitat, the lowland forests, due to cultivation, logging and settlements. It is rare in central and eastern Arunachal Pradesh. The status is better in Pakke Tiger Reserve (8 to 18 birds/km2) and Namdapha Tiger Reserve (2.5 to 6 birds/km2), but recent extensive habitat loss in adjacent areas in Assam has possibly reduced the range. Densities reported from sites in Thailand range from 0.12 to 8.23 birds/km2. In the Anamalai-Parambikulam region of the Western Ghats, densities range from 1 to 3 birds/km2 and they persist in medium and large rainforest fragments.

It is the most heavily hunted and valued hornbill species by tribal communities in Arunachal Pradesh and Nagaland. The upper beak, casque (by the Nyishi) and tail feathers (Wanchos, Noctes, Tangsas) are used in traditional headgear. The meat is eaten and fat is used for perceived medicinal values. The heads/beaks are often displayed in households.

However, there are taboos on hunting during the breeding season from March to August in some areas in Arunachal Pradesh. Local village councils have banned hunting and imposed fines throughout the year. A program to provide artificial fiberglass/wooden hornbill casques initiated with the Nyishi community has resulted in many people now wearing artificial beaks in some areas in Arunachal Pradesh. However, the demand for the real beaks/feathers still remains with the headgear being sold even in Government emporia despite it being illegal.

In the Vazhachal forests in Kerala, a conservation program is underway to monitor and protect Great hornbill nests with the Kadar tribal community. A pioneering program in Thailand protects hornbill nests through a hornbill family adoption program. A similar effort (Hornbill Nest Adoption Program) to protect hornbill nests and habitat in Arunachal Pradesh has also been initiated.