This striking black-and-white hornbill has a black neck and white underparts. Its black wings are tipped with white, and the tail is white on the outside with a black stripe running along the centre. The large yellow and black beak is topped with a big over-sized casque that ends in a single point. This hornbill is about 65-92 cm long and weighs about one kilogram. Male has a creamy white large bill with black base, and a huge ivory yellow and black casque with projecting front end, red eye with black bare skin, female is smaller with bare skin around eye pale blue, becoming pink during breeding season.They call loudly in squeals and cackles, either kleng-keng, kek-kek-kek or a kak-kak, kak-kak. 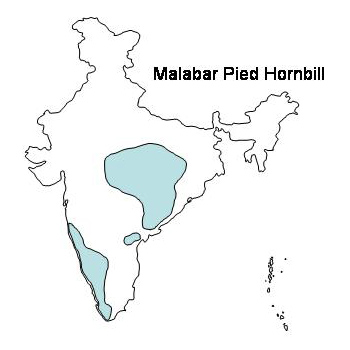 Although its name suggests that it is restricted to the Western Ghats, it is found in two regions of India: one population in the forests of central (Madhya Pradesh, Andhra Pradesh) and eastern India (Bihar, Orissa), and another in the foothills of the Western Ghats in parts of Maharashtra, Karnataka, Tamil Nadu and Kerala. Another population is found in Sri Lanka. They are often found in forests near streams and small rivers. Rainforest margins and deciduous woodlands, visits isolated fruiting trees, plains up to 300 m.

From one study, it is known that one fig species and Putranjiva (Euphorbiaceae) were the main food species in breeding season, but 17 species recorded in non-breeding season (mainly one fig species and Strychnos (Loganiaceae). Apart from fruits, they also eat termites, fish, crabs, lizards, snakes, young birds from their nest, and other small animals. They also come to the ground to pick up fallen fruits or animal prey.

These hornbills are found in moist forests, moving around in small groups of up to 10 birds, but are usually found in larger groups at fruiting trees. Sedentary, but makes local movements in search of fruiting trees. Gathers in flocks of around 35-40 birds around good feeding areas or roosts, makes loud whistles on arrival in roost. Up to 58 birds have been seen in a single roost site. They enjoy a dust-bath, for which they have to come down from their tree perches on to open ground. The female hornbill goes into her nest in March or April, and rears 2 or 3 chicks. Nest trees can be 3 to 15 m high. Tetrameles nudiflora and Terminalia bellerica have been reported as nest trees. Female seals the cavity with poop and pulp, clutch - 2 to 4 eggs, incubation is 29-30 days, female emerges out of nest earlier when the oldest chick is 10-35 days old, chicks stay a bit longer, female helps male feed the chicks, fledging period is 49 days.

Listed as Near Threatened by IUCN and in Schedule I of the Wild Life (Protection) Act, 1972. CITES, Appendix II.