This small, plain brownish-grey hornbill is found only in the tall wet forests of the Western Ghats. Its head and underparts have whitish streaks. It lacks the casque typical of Hornbills. Its beak is quite long, slightly curved and yellow. Its wings have white tips. The male has a long curved yellow-orange bill, paler at tip, low casque. Female is smaller, with smaller dark-spotted casque and black base of mandible. The tail is black, tipped with white at the bottom. White broad supercilium above eye running from head to hind neck, whitish streaks on head, crest, throat and upper breast. Size: 45 cm, male: 238-240 g. They are only about 60 cm long.

Call: Loud harsh chuckles, squawks, raucous cackling with laughter. It has a harsh "kyah, kyah, kya..." laughter-like call which can be heard from far away in the forest sounding a bit like pigs or chickens when they are caught. 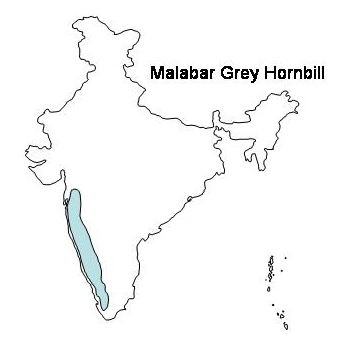 This hornbill is endemic to India, and found in the Western Ghats of south-west India. Found in evergreen and deciduous forests, riverine also above 500 m and lowlands. More in forests with dense tree cover than Indian grey and higher.

These birds are seen in flocks of 6 to 20 birds, usually at fig trees. They also eat insects, lizards and other small animals. Food is mainly fruits, important food species in the breeding season are Actinodaphne (Lauraceae) and Olea (Oleaceae). Sometimes it eats flowers, and takes animal prey like insects and small reptiles. Lipid-rich fruits like Aphanamixis polystachya very important, more than figs and animal matter according to one study.

Monogamous and breeds in pairs, eggs laid in Jan-May. The mother lays 2 to 4 eggs in her nest in January, and comes out with the chicks in early April. In Mudumalai, most nests were in Lagerstroemia microcarpa, Terminalia bellerica, and T. crenulata. Same nests are used year after year, sealed by female with droppings. Over 2000 food items delivered during entire nesting cycle. Moult of flight feathers by female noted, incubation is 40 days, fledgling period is 46 days. Female emerges together with chicks, nesting success in one study was 24 of 27 nests with chicks fledged. Sedentary, but moves locally. Flocks of up to 20 birds in fruiting trees.

Locally fairly common, large range of 230,000 km2, but optimal habitat has declined. Global population not known, but believed to be substantial. Habitat destruction has caused decline but not globally threatened.