This is a black hornbill with white tail. Only the male has a rufous-brown head and neck. Both male and female have blue around the eye and the throat is bluish-white in color. Length is 45-50 cm; male: 700-750 g; female: 600-750 g. This hornbill has a casque similar to that of the Wreathed Hornbill with small furrows on top of the beak. Call is loud harsh ka-ka-ka-ka followed by cackle. Alarm calls kraawk kok kok. The call reminds one of that of a domestic chicken.

Local Names: This bird has no local name since nobody lived on the island till recently. 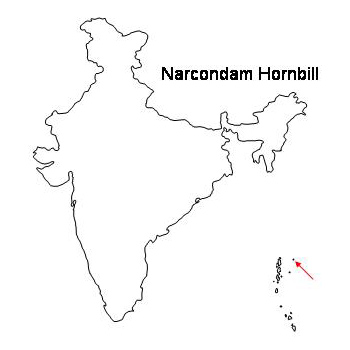 This hornbill is found in only one place in the world - on one tiny island (Narcondam Island) of 6.82 km2 at the northern tip of the Andaman and Nicobar islands in the Bay of Bengal.

Evergreen, deciduous forest from coastal inland to summit at 700 m. Almost all over except on grassy slopes on the south and south-east of the island.

Like other hornbills, these birds eat a lot of fruits, especially figs. Thirty-three plant species have been identified as food, four non-fig species comprised 73% of food items delivered at nest. Also eats geckos, skinks, spiders, mantids, land crabs and snakes. They are found in groups of 3 or 4, often calling noisily from the tall forest trees. Feeding parties of up to 50 recorded.

Nesting from February-April, nests in natural cavities that range from 1.6 to 28 m above ground, most nest trees are 10-15 m high. Seven nest tree species have been recorded; the main species used are Tetrameles insignis (Datiscaceae), Sideroxylon (Sapotaceae) and Sterculia (Sterculiaceae). Fifty percent of nest cavities on trunk, rest on broken branch. The female goes into her nest hole in February. She moults flight feathers and lays two eggs, stays inside the nest till they hatch, and until the chicks are big enough to fly. Male visits nests every 10-30 mins bringing 10-93 fruits per visit. There is no information on incubation and fledgling periods. At one nest, younger chick successfully fledged 10 days after older one. Female emerged with chick at one nest, and other chick came out 5 days later. Both male and female fed the chicks after fledging. No territoriality seen at nests. Adults roost lower at 255 m in pairs, while immature birds roost 3-7 per branch in higher elevations, roost sites are changed regularly.

Listed as Endangered on the IUCN Red List and in Schedule 1 of the Wildlife Protection Act, India.

Among all the Indian hornbills, this one is in greatest danger of going extinct, since it is found in only on this small island. There are about 400 hornbills on this island which is an extinct volcano. The whole island is a wildlife sanctuary. Population estimates vary from 200 to 432. In 2003, 320-340 birds (with 250 adults) was recorded.

Police post established in 1969, habitat degradation noted due to goats, firewood collection by policemen posted there. However, goats were moved off the island. Cyclones damaged nesting trees, and tsunami is a potential risk. Hunting for food is a danger and resulted in loss of estimated 25-40 birds annually.

In 2012, a proposal to build a diesel generator powered radar station by Indian coast guard was rejected. The species is considered endangered due to its tiny range, and small, possibly declining popn size with several potential risks. Population currently considered stable.