This medium-sized hornbill is dark brown on its head and back, and bright rufous-brown below. The sides of the head and neck are white in the male, which is why it was also called the White-throated Brown Hornbill. It has quite a small casque on its beak, and a blue patch around each eye. The tail is brownish-black with broad white tips on the lower part. They have a small keel-shaped casque covering almost the entire length of the beak. Males: 73 - 80 cm; body weight: 710 - 900 g. Female weighs about 755 g. Their call is a mixture of repeated screams and chuckles, a little bit like the Malabar Pied Hornbill. 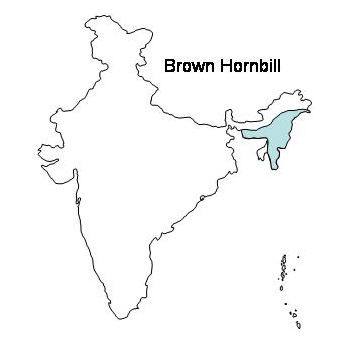 The white-throated brown hornbill is found in India, Myanmar, Thailand, Laos, Vietnam and southern China. In India, this hornbill is found in the hills of Assam, Arunachal Pradesh, Nagaland and Manipur. The best place to see this bird is Namdapha Tiger Reserve. The species lives in dense evergreen forests from the plains up to 900 meters.

The species is monogamous, sedentary and territorial. They have a co-operative breeding system with breeding males assisted by juvenile helpers at the nest, who help in nest guarding and/or feeding the chicks. The breeding season in north-east India is from April to July and August. Estimated density in Namdapha Tiger Reserve is about 11 birds/km2. Small groups move around noisily in evergreen forests, eating fruits along with other fruit-eaters. Compared to other hornbills, they eat more insects, lizards, and rats. When the female hornbill goes into her nest in April, she is fed not only by the male, but also by her older sons, until she comes out of the nest with her chicks in July or August.

Listed as Near Threatened (NT) on the IUCN Red List. Listed in Schedule 1 of the Wildlife Protection Act, India.

The main threats that the species faces are extensive habitat loss and modification, especially in Upper Assam and Tirap districts. With a naturally restricted and localized range, their situation is worsened by hunting, but much less than other hornbill species. It is probably the most threatened of the species in north-east India in terms of total population, since it has a restricted distribution and most of its lowland habitat in Assam has been destroyed.