Also known as Bar-pouched Wreathed Hornbill. Males: length: 100 - 117 cm, body weight: 2.04 -3.65 kg), females: body weight: 1.36 - 2.685 kg. This large hornbill is mostly black, with a fully white tail. Only the male has chestnut-brown on the head, and a bright yellow throat. The female has a bright blue throat. Both the male and female also have an incomplete band or mark on their throat. The casque on the beak is not horn-like, but looks more like a carved piece of wood with neat furrows or wreaths from which it gets its common name.They have a call with three notes that sounds like oek-uk-uk and is repeated several times, sometimes very loudly, at other times more softly. 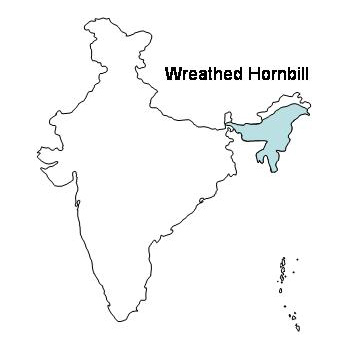 They are found in the forested hills of north-eastern India and also in other countries like Bangladesh, Nepal, Bhutan, Myanmar, Thailand, Cambodia, Laos, Vietnam, peninsular Malaysia, Indonesia on Sumatra and some islands in south-east Asia. The species mainly inhabits lowland foothill semi-evergreen and evergreen forest, but seasonally migrates up to 2,560 meters (~ 8,400 feet). It can occur in logged forests and plantations near larger intact forests, provided it is not heavily hunted and if the habitat is not subjected to further degradation.

In north-east India, it is commonly seen in Manas, Nameri, Pakke and Namdapha Tiger Reserves.

The species is highly frugivorous, mainly feeding on berries, drupes, capsular fruits of primary forest species belonging to Lauraceae, Meliaceae, Annonaceae and figs (Moraceae). In the breeding season, it also has been known to consume beetles and crabs. In Pakke, it is known to eat the fruits of over 60 non-fig tree species.

The species is monogamous, non-territorial, undertakes large-scale movements and appears to show seasonal altitudinal preferences, moving to higher areas in the non-breeding season. The breeding season in north-east India is from March to early August. The nesting cycle ranges from 120-140 days. It is known to roost communally in large flocks of up to 700 birds in Thailand; in Pakke Tiger Reserve, roosting flocks of up to 100 birds are seen.

Listed as Least Concern (LC) under the IUCN Red List. Listed in Schedule 1 of the Wildlife Protection Act, India.

The status of this species in most north-eastern states is poorly known. In several sites across Arunachal Pradesh, this species is more common than the other hornbill species. However, it faces threats from hunting and habitat loss due to logging, cultivation and settlements, particularly in its preferred breeding habitat, the lowland forests. The status of this species is better in Namdapha Tiger Reserve where it seasonally occurs in densities as high as 24 birds/km2 but recent extensive habitat loss in adjacent areas in Assam has reduced the range.

It is less hunted than the other two large hornbills and relatively more common. There are local taboos on hunting during the breeding season, which takes place from March to July and August. Since 2003, local village councils have banned hunting of hornbills in and around the Pakke Tiger Reserve and this has been largely effective.