The Rufous-necked Hornbill is a large-sized hornbill with males measuring between 99 and 122 cm and weighing 2,500 g. Females are smaller, weighing 2.27 kg. 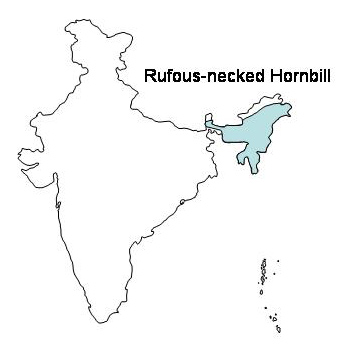 In Nepal, the Rufous-necked Hornbill is believed to be extinct. It is currently found in north-east India, Bhutan, east Myanmar, north and west Thailand, southern China, north Laos and north Vietnam. It is unconfirmed in Cambodia.

Although it is found in many countries, the species is rare in most parts of its range, though in Bhutan it is more common. In India, its status is better only in some protected areas of Arunachal Pradesh such as the Namdapha Tiger Reserve and it is also seen in Eaglenest Wildlife Sanctuary and the higher areas of Pakke Tiger Reserve. It is also commonly seen in Mahananda Wildlife Sanctuary and Neora Valley National Park in northern West Bengal.

The species is restricted to hill evergreen forest between 500 and 2,200 meters, but occasionally has been seen as low as 150 meters.

The species is monogamous and probably territorial. It is mostly seen in pairs and appears to be more sedentary than other hornbill species. The breeding season in Arunachal Pradesh, north-east India is from mid to late April to July and August.

Listed as Vulnerable (VU) on the IUCN Red List. Listed in Schedule 1 of the Wildlife Protection Act, India.

The main threats to this species includes hunting and to a lesser degree habitat loss, conversion, and modification due to logging, shifting cultivation, and settlements. It is rare in most parts of Arunachal Pradesh due to these human activities. The density of this species is about 7 individuals per km2 in the Namdapha Tiger Reserve, with approximately 1000 km2 of favorable habitat. The Namdapha Tiger Reserve is one of the most important areas for conservation of this species globally.

Hunting is the main threat to the species, since it is heavily hunted and prized by several local tribal groups including the Nyishi, Wancho, Tangsa, Mishmi, Adi and Apatani in Arunachal Pradesh, especially in higher elevation sub-tropical evergreen forests where the Great and Wreathed Hornbills are less commonly seen. Forest loss is possibly a lesser threat for this species, because the condition and extent of forests at higher elevations in some areas are better than the foothill forests.